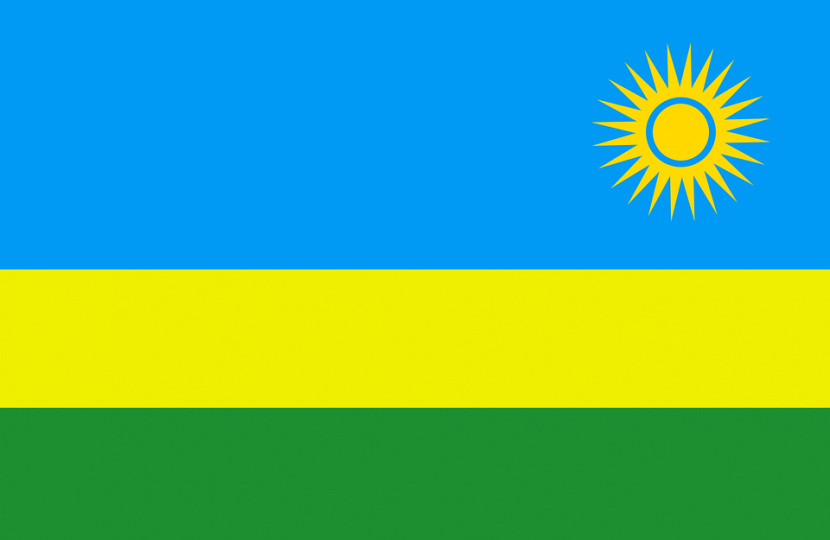 The United Kingdom has a proud history of supporting those in need of protection; our resettlement programmes have provided safe and legal routes to better futures for hundreds of thousands of people from across the globe. This includes individuals from Hong Kong, Syria, Afghanistan, and Ukraine.

However, it is clear that the global asylum system is broken. Some 80 million people are on the move around the world, uprooted by conflict and instability. Many more are on the move to seek better prospects, driven by a desire for a better life. The result is increased illegal migration flows, including into Europe and onto the UK, with the asylum systems collapsing under the strain of real humanitarian crises and the work of people smuggling gangs.

As a result of the UK's Migration and Economic Development Partnership with Rwanda, people who enter the UK illegally may have their asylum claim considered in Rwanda, with a view to receiving the protection they need there if their claim is successful. Every person who comes to the UK illegally, or by dangerous or unnecessary methods from safe countries – including those arriving by small boats, hidden in the back of lorries and found in the UK without leave – will be considered for relocation to Rwanda. Furthermore, any person who has arrived in the UK in this way since 1 January 2022 will be considered for relocation.

Combined with asylum reforms and legal changes through the Nationality and Borders Act, these new measures will deter illegal entry into the UK, and in doing so will help break up criminal smuggling gangs, protect the lives of those they endanger, ensure continued support for the truly vulnerable, and enhance our ability to remove those with no right to be in the UK.

Rwanda is a fundamentally safe and secure country with respect for the rule of law.  Under this agreement, Rwanda will process claims in accordance with the UN Refugee Convention, national and international human rights laws, and will ensure their protection from inhuman and degrading treatment or being returned to the place they originally fled. Rwanda has a credible track record of hosting refugees and working constructively with the UN Refugee Agency to provide food, healthcare and jobs with over 130,000 refugees recently resettled in the country.

People will have support and care, meeting their needs as their asylum claims are processed and considered in Rwanda. This includes safe and clean accommodation, food, healthcare, amenities, recreation. They will have full access to translators and will be able to access legal support to appeal decisions in Rwanda’s courts. They will not be detained. If successful in being granted refugee status, people will be given full rights in Rwanda and will be helped to fully integrate with a five-year package of training and support.

The UK is investing £120 million into Rwandan economic development and growth, with funding also provided to help deliver asylum operations, similar to the costs incurred in the UK. Furthermore, Rwanda has one of the fast-growing economies and enterprise cultures, with growing trade links with the UK, which this scheme will complement as part of our Global Britain agenda. As a friend and close partner, the UK encourages Rwanda to uphold and champion Commonwealth values of democracy, rule of law and respect for human rights. At the recent Commonwealth Heads of Government Meeting in Kigali, the UK, Commonwealth Chair-in-Office since 2018, handed over leadership of the organisation to Rwanda.

Ministers have been clear that the Government's 'Migration and Economic Development Partnership with Rwanda' fully complies with international and national law and the Home Office has stated that it will defend any legal challenge robustly. As I am sure you can appreciate, it would not be appropriate for me to comment on specific legal proceedings. I would, however, hope, more generally, that the courts are able to swiftly deal with any individuals who seek to frustrate the process and delay removals. I am also encouraged that the Home Secretary has reiterated that she will not be deterred from acting to deliver on the changes the British people voted for to take back control of our money, laws and borders.

To be absolutely clear, the European Court of Human Rights (ECHR) did not rule that the policy or relocations were unlawful. While prohibitions on the affected individuals last for different time periods, they are not an absolute bar on their transfer to Rwanda. I am encouraged that anyone who has been ordered to be released by the ECHR will be tagged while the Home Office continue to progress their relocation.

The decision to intervene by the Strasbourg court was disappointing and surprising given the repeated and considered judgments to the contrary in the UK’s courts. I share the Home Secretary’s concern about the opaque nature of the conduct of the appeal by the ECHR, and it is right that the Home Office now spend time going back to the Court to get the grounds upon which it made its decision. I welcome that the Government remains committed to this vital policy.