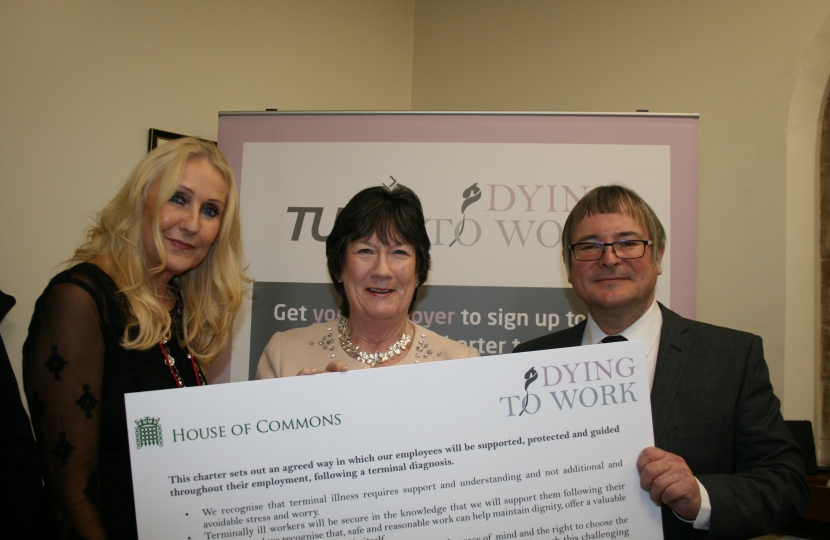 On Tuesday 12th December Pauline Latham OBE MP was delighted to welcome her constituent Jacci Woodcock to Parliament for an event which gave Members of Parliament the opportunity to sign the ‘Dying to Work Charter.’

Following a terminal cancer diagnosis Jacci Woodcock, from Belper, was treated terribly by her former employer. She was provided with no support and her employer tried to sack her.  She felt as though she was being pushed out.  Over the past few years Jacci has campaigned tirelessly for the Dying to Work Campaign. The ‘Dying to Work’ campaign is a cross-party campaign for additional employment protection for terminally ill workers. Jacci wants a change in the law to be her legacy.

The signing event in Parliament was an opportunity for Parliamentarians to show their support for the campaign and encourage other employers across the UK to follow suit.  Also, by signing the Charter Members of Parliament are providing a commitment to their own staff should they become terminally ill.  The event was successful with 106 MP's signing the charter.

Also at the event Weetabix signed the charter.  This will provide further protection to hundreds of employees should they become terminally ill.

Pauline said, “It was great to welcome Jacci to Parliament once again.  Jacci’s work on this campaign has been inspirational.  I admire her great dignity and determination. It is only right that terminally ill workers are given the appropriate support and that their rights are up held. This event was a fantastic opportunity to raise awareness of the Dying to Work Campaign.  It was great to see so many of my Parliamentary colleagues signing up to the charter - in total 106 MP's signed the charter which exceeded all expectations.  I would also ask them to encourage businesses within their constituency to do the same.

More information can be found at: https://www.dyingtowork.co.uk/