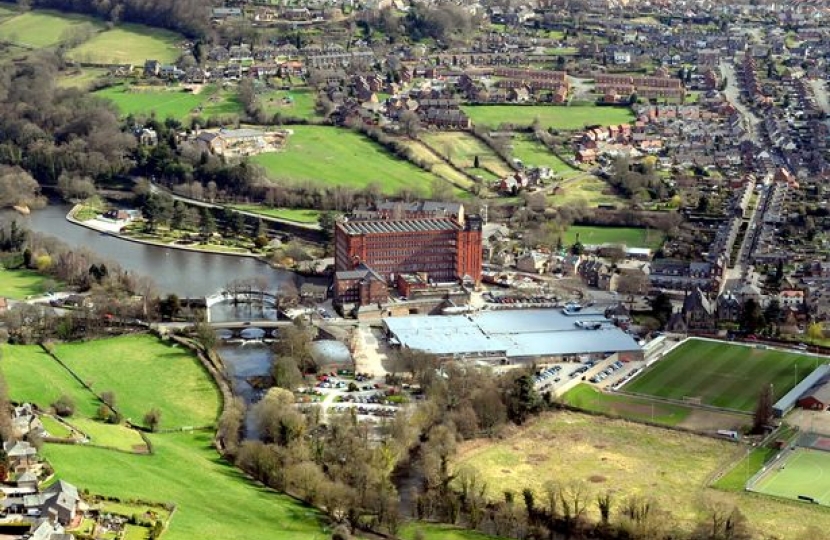 A Derbyshire MP has come out in support of a campaign to protect Belper’s greenbelt and historic sites.

Pauline Latham, MP for Mid-Derbyshire, has written to Communities Secretary, Sajid Javid, calling for greater protection from developers who she believes should be building on former industrial land or brownfield sites instead.

The move follows a campaign by Protect Belper, an action group fighting to preserve the heritage of the former mill town.

Mrs Latham said: “The people of Belper are rightly proud of the accolades which have been bestowed upon the town over recent years, notably the Best British High Street award.

“The High Street complements the wonderful vista of green belt which surrounds the town.

“However, planning applications are still being submitted for those greenfield sites which, we should remember, are situated within the buffer zone of the Derwent Valley Mills World Heritage Site.

“I am not surprised that residents are outraged and want action to prevent such developments.”

Mrs Latham highlighted a planning application for industrial development at Bullsmoor which was originally rejected because it was situated within the World Heritage Site buffer zone but has now been resubmitted.

In her letter to Mr Javid, she included comments from John Baldwin who is part of the Protect Belper campaign group which is trying to prevent this land from development.

Mr Baldwin has complained at the ambiguity in the National Planning Policy Framework and the need for greater protection of heritage assets.

Mrs Latham said: “The fact that developers are repeatedly submitting planning applications for these areas of land is causing anger in the local community and I strongly feel that the Government needs to step in.

“Obviously, I am aware that there is a national housing shortage but there are brownfield sites within the local area which could be utilised.

“Of course, there is no need for immediate alarm because the applications have yet to be approved but if developers are still trying to build on this land, there is an implication that they are not being dissuaded by clear government policy.”

With this in mind, Mrs Latham has invited Mr Javid to visit Belper and the Derwent Valley Mills World Heritage Site so she can show him the area’s great beauty and historical importance.

She added: “Hopefully, he will take me up on my offer and be prompted to issue clear edicts which will help us preserve these sites for many future generations

“I have been a passionate defender of the green belt during my time in parliament and last year pressed the Government on its plans for brownfield sites."

In reply, the then minister for housing and planning, Brandon Lewis, said that, through the Housing and Planning Act 2016, planning permission in principle for brownfield registers was coming through and there was a £1.2 billion fund for starter homes, which was applicable to the brownfield sites.

“However, despite his insistence that the Government is pressing for applications on brownfield sites to be given greater weight, it appears the developers are not getting the message.

‘Until they do, there will remain a cloud over our green fields.”