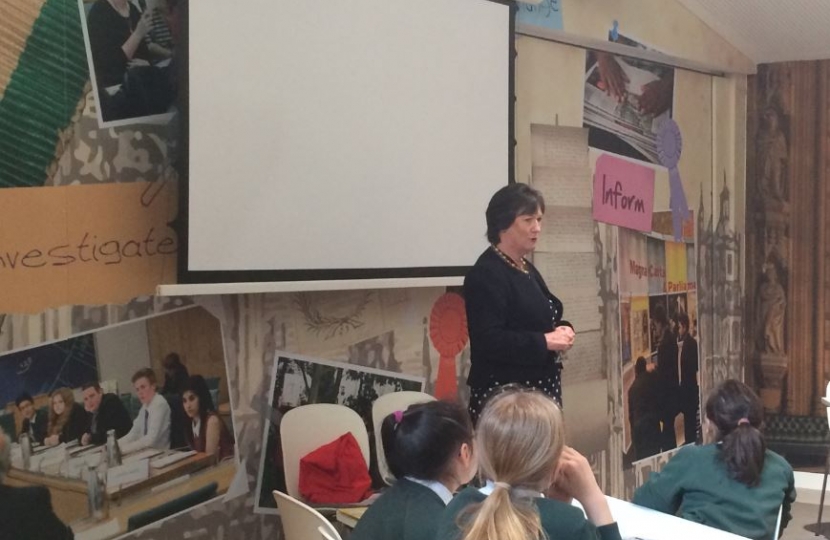 Pauline Latham OBE MP (Mid Derbyshire) welcomed Year 6 students from Asterdale Primary School to the Parliamentary Education Centre at Westminster on 16th March 2017, where she explained a bit about her job as an MP and answered a variety of imaginative questions.

On a day trip from Derbyshire, the children had a chance to quiz their local MP about her work. Luckily for Pauline, the questions were slightly less confrontational than you might find on Newsnight, though certainly harder to predict; there were a variety of curious students asking about issues ranging from whether or not Pauline gets to wear a sword to what time she gets into work each day.

As well as responding to their questions (the time she gets into Westminster varies depending on meetings and her constituency business and, unfortunately, she does not get to wear a sword) Pauline told the students a bit about her most recent work – including fighting to bring in tougher legislation on the UK ivory trade and working on the poppies coming to Derby, an event she said she hoped the children would be able to see. Finally, she told the pupils that she hoped they would develop an interest in politics and even consider the work for themselves one day – whether being a councillor or an MP.

Commenting on the event, Pauline said:

“It was lovely to meet the children from Asterdale Primary School. They were very enthusiastic despite getting up so early to come to Westminster and it was great that they asked so many questions and were so curious: I might ask why MPs can’t wear swords at the next Prime Minister’s Questions…

Teaching the children about British democracy and our parliamentary system is very important, and I hope the event proved a fun day out for them”.