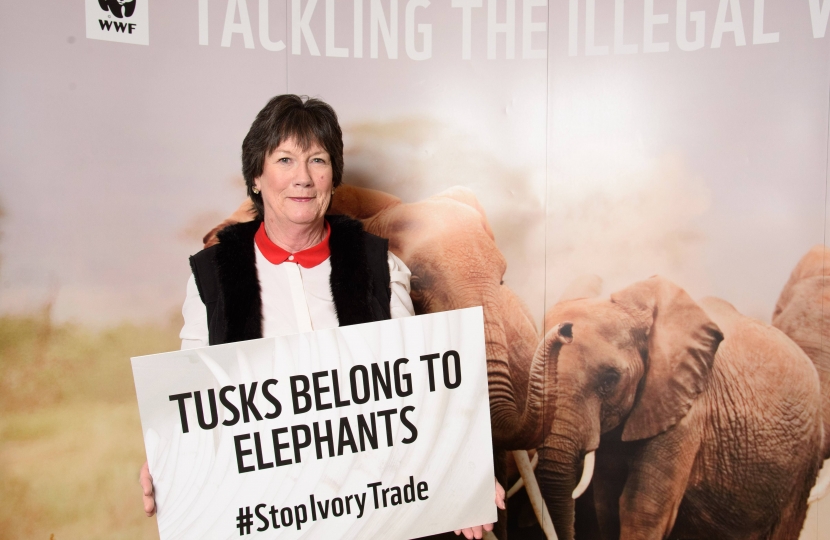 Pauline Latham OBE MP showed her support for WWF’s campaign to end the illegal wildlife trade by attending a charity event in the Houses of Parliament last week to celebrate China’s ivory ban, which came in to force this month.

Foreign Secretary Boris Johnson addressed the reception, which was also attended by Environment Secretary Michael Gove, representatives of the Chinese Embassy and MPs and Lords from across the political parties.

The Chinese move comes as a proposal to also ban ivory trade in the UK has been announced by the UK Government.  Many people responded to the recent consultation on this plan, and WWF is calling for confirmation of a UK ban before The London Conference on Illegal Wildlife Trade, which takes place on 10-11 October 2018.

Pauline commented:   “I was delighted to be able to attend WWF and the Chinese Embassy’s reception, and show my support for ending the ivory trade.

This is an issue which I have campaigned on for many years.  A world without African elephants is unthinkable, and governments across the world need to do everything they can to ensure it never happens.

I know that this is an issue which people care deeply about.  I was pleased that tens of thousands of people responded to the UK Government’s recent consultation on banning the ivory trade.  We now need to get on and do it – 2018 should be the year when we turn the tide on the poaching of elephants and other precious wildlife.”