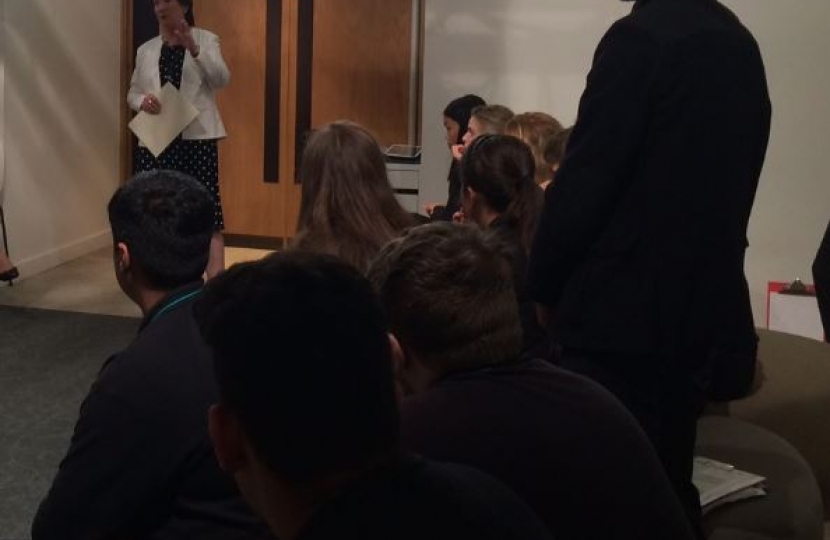 Pauline Latham, MP for Mid Derbyshire, met with a group of West Park School students in Westminster on 11th July 2017 to discuss her role as an MP.

The students took part on a tour of Parliament and then met Pauline to learn about her work and quiz her on her job. As well as a valuable opportunity to meet some new constituents, Pauline hoped to get the students involved with, and informed about, politics – no matter which party they might eventually support.

After a brief introduction about her job, Pauline took questions from various students. Thankfully for her, the questions were less taxing than those you might face from Jeremy Paxman: though they were certainly no less imaginative. She discussed how she first became interested in politics; her opinions on Brexit; and her views about the hung Parliament (unsurprisingly, not that pleased).

When the pupils had exhausted their supply of questions Pauline explained that, if they wanted to come again, they could email their MP – most likely her – expressing their desire to come and get a tour of Westminster.

After the talk Pauline said: “It was a great pleasure to meet pupils from West Park School and speak to them about what an honour it is to be the MP for Mid Derbyshire. They had an interesting mix of questions, and I hope that they are now more interested in politics as a result of their visit”.