STATEMENT ON THE WITHDRAWAL AGREEMENT 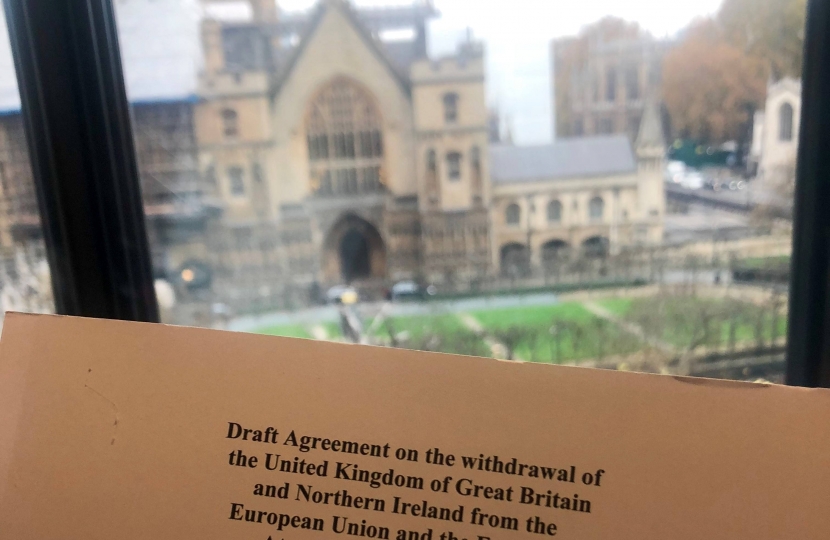 Why should the United Kingdom hand over £39bn of taxpayers’ money with nothing guaranteed in return?

And why should we continue to be bound by European laws in vital areas such as social, environmental and employment policies?

Ironically, I was in Kenya, playing my part in negotiating trade relations outside of the EU when Theresa May presented her ‘deal’ to parliament.

Her proposal had led to much frustration among those of us who voted to leave the European Union because we feel it is not cutting the cord in the way the majority of the electorate wanted.

Following the PM's speech at Conservative Party Conference, I was hopeful that she was steering us towards a sensible Brexit but the withdrawal agreement has shown that she has not listened.

Indeed, I don’t think she will be able to convince enough MPs that hers is the correct path and, consequently, we will have to renegotiate.

I believe that the UK should take a stronger line with Europe for several reasons – not least because that is what the majority of the Mid-Derbyshire constituents want.

The majority who have contacted me have lost faith in Mrs May because of her Brexit plan.

They want to know why World Trade Organisation rules cannot be applied to the relationship between the UK and Europe.

They also believe that the Canada+++ deal would have been the best option.

Under Mrs May’s proposal, the UK would agree a financial settlement with the EU of £39bn, including budget contributions during the transition period up to December 2020.

We would also be paying for unfunded EU commitments and EU pensions.

In return for this vast sum of money, the United Kingdom is not guaranteed any future trading arrangements.

Meanwhile, the UK will be bound by EU laws in key areas but will have no further influence over how they are drafted.

This week I have been on a trade mission to Kenya and saw some fascinating possible link-ups with the UK.

Why on earth should these be put on hold because of our relationship with Europe?

Mrs May’s “agreement” creates internal borders within the UK and would leave Northern Ireland having to apply EU rules in areas such as goods, agricultural products and VAT.

The fifth key issue is that The European Court of Justice would remain in control of the agreement and the EU laws which the UK will be subject to.

The fact is that, if this deal is agreed, the United Kingdom would be half in and half out of the European Union.

Our laws would be created abroad and we would have no influence over them. This is completely against the spirit of the 2016 referendum in which 17.4 million UK citizens voted to leave the European Union.

I am a member of the European Research Group and we believe that the UK should renegotiate Brexit, taking the existing EU/Canada trade agreement and adding on some additional elements, such as a security protocol and a protocol on data.

A ‘super-Canada’ trade agreement would not involve being in the single market or customs union and would not leave the UK subject to the authority of the European Court of Justice.

But we would not have surrendered our destiny and breached the spirit of the referendum.