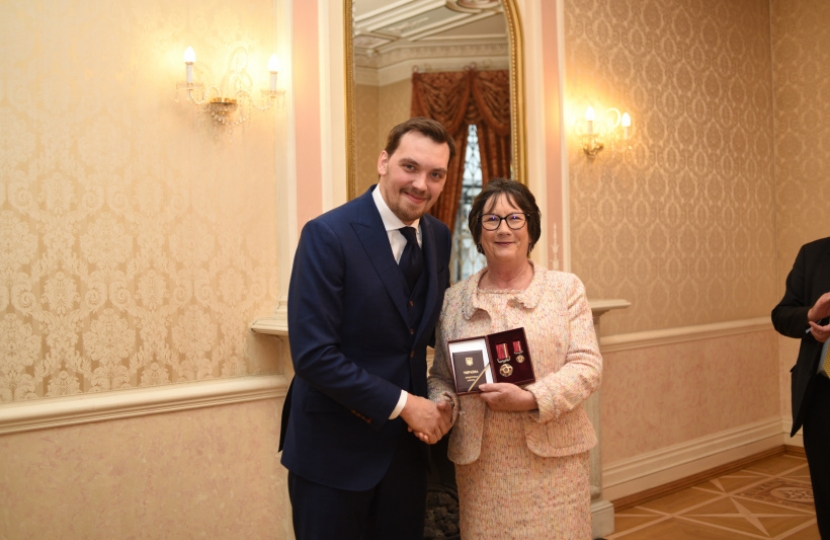 Mid Derbyshire MP Pauline Latham has been presented with the Ukrainian Order of Merit by the country’s Prime Minister.

Mrs Latham was cited for her continued demands to recognize the 1932-1933 famine as a genocide against the Ukrainian people by Soviet Leader Joseph Stalin and to include the topic of famine in the school curriculum.

The state award was “a symbol of the deep gratitude of the Ukrainians for the principled stand in support of Ukraine's sovereignty, territorial integrity and independence,” said Prime Minister Oleksiy Honcharuk.

Mrs Latham has repeatedly called on the UK Government to recognise the Holodomor in Ukraine as genocide since first speaking in the House of Commons on the subject in 2013.

She said: “Holodomor literally means “death by starvation”, and the Ukrainian Holodomor was a campaign purposely orchestrated by Joseph Stalin to decimate a large segment of the Ukrainian population—the peasants.

“The Soviet Government tried to requisition as much food out of Ukraine as possible at that time. It is broadly understood that the genocide began in 1929 with mass deportations of prosperous farmers and the execution of Ukrainian religious, academic and cultural leaders.

“Soviet authorities set unachievable goals for Ukraine’s basic grain production of 44% in 1932. That was exceedingly high and achieving it was even more difficult given that the communists had already ruined the nation’s productivity by eliminating their best farmers.

“In 1932, not a single village was able to meet the impossible quota and, under Soviet rule, no grain could be given to a peasant until the quota was achieved.

“Men, women and children were slowly starved to death through the implementation of a policy intended to put an end to the Ukrainian aspiration for independence.

“Ukrainian peasants had their basic freedoms stripped away. They were banned from leaving their towns and villages. There was no escape. The ways to rescue were intentionally blocked. Soviet troops detained hundreds of thousands of farmers, 90% of whom were forcibly returned to their hungry villages to die.

“Although the exact number of those who died during the Holodomor is not known, it is estimated to be between 7 million and 10 million Ukrainian people.

Mrs Latham added: “I was deeply honoured to receive the award from the Ukrainian Prime Minister, on behalf of his president and I still feel passionately that the Holodomor should be recognised as genocide.”

On Monday 24th May, I visited the new 1924 Arcade on Campbell Street in Belper.  It is an incredible building that has been converted to house a number of independent businesses including a hair salon, children’s clothes shop, jewellery shop, book shop, Christmas shop and several others.