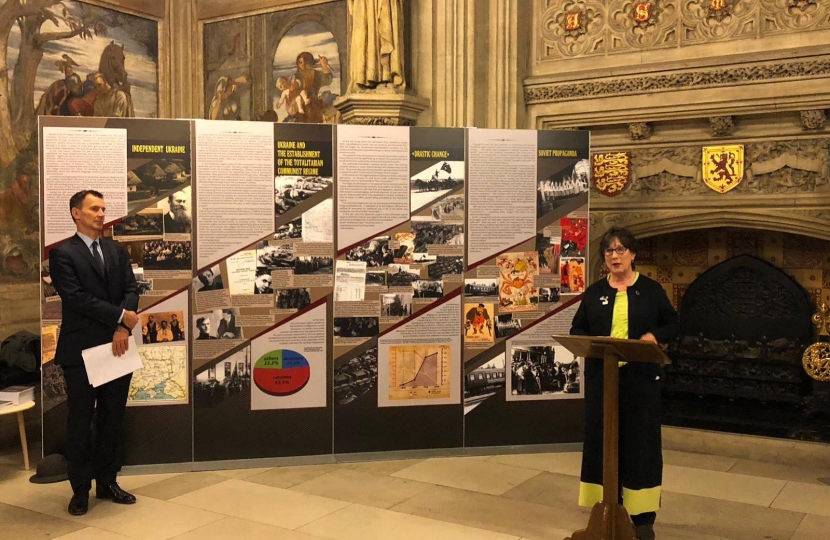 It was a great honour to sponsor an exhibition on the Ukrainian Holdomor, in the Upper Waiting Hall in Parliament.

The Holodomor was a man-made famine in Soviet Ukraine in 1932 and 1933. It saw the murder of millions of Ukrainians, some estimates say as many as 10 million.

In June of 1933, at the height of the Holodomor, 28,000 men, women and children in Ukraine were dying of starvation each day. The land that was known worldwide as the breadbasket of Europe was being rava...ged by a man-made famine of unprecedented scale.

Entire villages were wiped out, and in some regions the death rate reached one-third. The Ukrainian countryside, home of the "black earth", some of the most fertile land in the world, was reduced to a silent wasteland.

As we are sadly aware, the 20th century was a time of great human tragedies. Although most British people know about tragedies such as the holocaust of 1939 to 1945, few British have heard about the horrors of the Holodomor, and until recent years, world awareness was minimal. The crimes of Bolshevism and Stalinism are identical to those of Nazism. The very nature of those regimes is one and the same.

This exhibition is an opportunity to raise awareness of the awful events of 1932 and 1933.

Thank you to the Foreign Secretary, Rt Hon Jeremy Hunt MP, for attending and for his moving remarks.